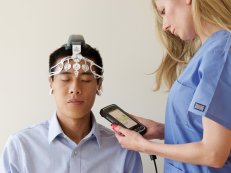 Medical imaging is an important part of assessing the severity of head injuries, but a new device could help medical providers in emergency situations detect structural damage to the brain even before you reach a CT scanner.

The FDA approved BrainScope’s Ahead 100, in 2014, a device that patients wear on their heads – like a hat – that can produce an electroencephalogram of the brain’s structure.

Inc. announced that the United States Food and Drug Administration (FDA) has cleared the company’s “Ahead 200” device. Using commercial smartphone hardware that leverages Google’s Android operating system, the Ahead 200 records and analyzes a patient’s electroencephalograph (EEG) using a custom sensor attached to the handheld to provide an interpretation of the structural condition of the patient’s brain after head injury.

It is indicated for use as an adjunct to standard clinical practice to aid in the evaluation of patients who are being considered for a head Computerized Tomography (CT) scan, but should not be used as a substitute for a CT scan. It is to be used on patients who sustained a closed head injury within 24 hours, clinically present as a mild traumatic brain injury (TBI), and are between the ages of 18-80 years.

In September 2016 Brainscope announced clearance by FDA for its latest device, the Ahead 300. This the first of the company’s products that will actually be distributed commercially and it was touted as their most advanced version. It utilizes disposable electrodes and a connected smartphone to process the information. It relies on the firm’s proprietary algorithms and machine learning to spot certain patterns and correlations within the recorded brainwaves.