Skip to content
HomeBrain Injury does NOT equal Lack of Intelligence

Brain Injury does NOT equal Lack of Intelligence

Unless there is objective evidence of brain injury on MRI or CT Scan (hemorrhages, hematoma’s penetrating skull fractures into the brain, etc) people assume the individual expressing symptoms of a traumatic brain injury is faking, exaggerating, or malingering their injuries or the person has psychological problems that had to have pre-existed before their accident.  The reality is that the majority of mild (mTBI) and moderate brain injuries show normal results on an MRI and CT scans.  They do not show diffuse axonal injuries nor do they show levels of intelligence. Keep in mind also, that women also tend to have longer recovery times than men with regard to brain injuries as shown in recent studies.

Diffuse axonal injuries (DAI) are caused by acceleration, deceleration, and contact forces. DAI affects individual nerve fibers which can lead to a disruption in nerve communication.  DAI is microscopic damage to the axons in the brain neural tracts, corpus callosum, and brainstem, is associated with significant mortality and morbidity. When these forces are great enough it creates a shearing force that severs the axons of nerve fibers, which causes nerve cells to die and can create swelling in the brain. The main symptom of diffuse axonal injury is lack of consciousness, which can last up to six hours or more. A person with a mild or moderate diffuse axonal injury who is conscious may also show other signs of brain damage, depending upon which area of the brain is most affected.

Diffuse axonal injury causes cognitive, physical, and behavioral changes that compromise social reintegration, return to productivity, and quality of life of patients and their families. These changes persist beyond the acute phase of treatment and continue for a long period after the traumatic event. Diffuse axonal injury, and more generally TBI, often results in physical, cognitive, and behavioral impairments that can be temporary or permanent.

Due to the diffuse and microscopic nature of the injury, CT scans and general MRIs are typically negative unless small areas of bleeding within the brain are noted within the cerebral cortex or corpus callosum (tracts of white matter in the brain). If a patient presents with unconsciousness and these tests are negative, the medical facility should move onto a different imaging technique to check for DAI. Depending on the severity of the injury and the extent of the damage. A concussion can be considered a mild case of shearing brain injury. At its mildest, DAI can occur unnoticed.

brain inflammation or swelling.  This can lead to restricted blood supply to the brain tissue and brain herniation. Tonsillar herniation is a type of cerebral herniation characterized by the inferior descent of the cerebellar tonsils below the foramen magnum. Chiari one malformation is a form of tonsillar herniation and is now known to be caused by trauma (like severe whiplash and traumatic brain injury) or in most cases “symptoms awakened” from trauma.  This is an often overlooked correlation between trauma and DAI and TBI.

The occurrence of DAI depends on the mechanism of injury; it is more common in higher energy trauma, especially traffic accidents.  Someone who has incurred high velocity trauma, blunt force injuries, or multi-system traumas often have post-traumatic amnesia (PTA).

PTA is another good estimate for severity of a brain injury. Anytime a person has a major blow to the head he or she will not remember the injury and related events for some time afterward. People with these injuries might not recall having spoken to someone just a couple of hours ago and may repeat things they have already said. This is the period of posttraumatic amnesia. The longer the duration of amnesia, the more severe the brain damage.

A brain injury does not necessarily affect intelligence. Intelligence is a stable trait which includes many aspects of cognitive functioning. Following a traumatic brain injury, the brain is unable to function as well as it did prior to injury. This is why we typically see some difficulties with memory or academics. However, once the brain recovers there is no change in a person’s overall intelligence. Your intelligence is based, depending on the definition of intelligence, on the son total of your knowledge.

Someone’s IQ can be unaffected by a TBI, but other parts of the brain that “pilot” or guide one’s brainpower can be messed up. Decision-making and complex social interactions can cause major problems in one’s life and career. The individual with high intelligence may still have cognitive problems such as headache, difficulty thinking, memory problems, attention deficits, mood swings and frustration. These injuries are commonly overlooked, especially in those with high intelligence.  Their low threshold of functioning or slower processing speeds may appear as average where prior to injury they would have tested as above average..

The brain of the intelligent person is more complex in appearance, not as soft, and has greater weight relative to size. Additionally, it can be noted that the intelligent brain may have an enlarged prefrontal cortex or parietal lobe relative to other areas of the brain. More intelligent people have more wires, more connections and more complex architectures in their brains. These are reflective of genetics, as well as developmental experience.

Also, more intelligent people may enjoy higher processing speed or impulse conduction in brain-wires (axons). But with more complexity in the brain, the net result still could look in performances as much slower decision making resulting in a dulled sense of self, lower test scores compared with their education/experiences, and reduced overall performance compared with their performance before injury.

That being said, Intelligence and personality dysfunctions after minor traumatic brain injury (TBI) (whiplash; slight head impact) incurred in a motor vehicle accident (MVA) were studied in adults after an average interval of 20 months. There was a mean loss of 14 points of Full Scale IQ from estimated preinjury baseline IQ determined from the standardization group (WAIS-R) without evidence for recovery. Personality dysfunctions included cerebral personality disorder, psychiatric diagnosis (30 of 33 patients), post-traumatic stress disorder, persistent altered consciousness, and psychodynamic reactions to impairment. Cognitive loss is caused by interaction of brain injury with distractions such as pain and emotional distress. Unreported head impact and altered consciousness at the time of accident contribute to the underestimation of brain trauma after minor TBI.

Just one concussion can lead to a decrease in brain volume, according to a new study in the journal Radiology.

“This study confirms what we have long suspected,” study researcher Dr. Yvonne W. Lui, M.D., assistant professor of radiology and the neuroradiology section chief at NYU, said in a statement. After mild traumatic brain injury, “there is true structural injury to the brain, even though we don’t see much on routine clinical imaging. This means that patients who are symptomatic in the long-term after a concussion may have a biologic underpinning of their symptoms.” 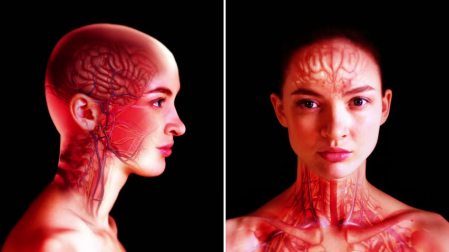 Researchers specifically found that those who had sustained a mild-traumatic brain injury had less brain volume in regions linked with anxiety, memory and attention problems.

2 thoughts on “Brain Injury does NOT equal Lack of Intelligence”